Fire safety has always been a priority in the construction industry, and flat roofing systems had to comply with stringent fire performance criteria for many years. However, since the Grenfell disaster in 2017 the flat roofing sector, like the rest of the industry, has had to closely examine how standards can be improved further.
Today, it is more important than ever that specifiers and building owners understand the latest fire safety requirements so they can make informed decisions on the safest, most effective products to use.
So, exactly who is responsible for fire safety in flat roofing? The reality is that fire responsibilities are shared between all parties involved in the design, approval, manufacturing, construction and sign-off of flat roofing systems.
However, the most responsible individuals are the fire consultant specialists and Building Control consultants who must check every detail of the roofing system manufacturer’s data and any third-party accreditation to ensure compliance with all necessary requirements. Their judgement will ultimately lead to a particular system being specified or rejected and can have a knock-on impact to whether insurance will be approved.
During 2020, many roofing system design applications were rejected if they did not totally comply with third party accreditation such as fire test and BBA certificates, including the type and thickness of insulation.
Flat roof waterproofing systems must comply with all current Building Regulations along with several other potentially confusing tests and standards. It’s obviously important to understand how they should be interpreted to specify an appropriate roof waterproofing system.
The regulations for flat roofs require that the specified flat roof system provides external fire protection from “spread of flame” and “penetration of flame”. For decades, the standard flat roof fire certification in the UK was in accordance with BS476: Part 3:2012 (originally created in 1958) and the flat roofing industry was used to seeking the ultimate fire rating of EXT.F.AA.
In 2016, the UK construction industry entered a transition period to accept a new European fire rating standard – EN 13501-5:2016. This standard incorporates four different European test methods for external fire exposure to flat roofs, derived from the various national test methods.
These European test methods are designated as Broof t1, t2, t3 and t4, with the nearest to the original UK standard being Broof (t4). This is also the most stringent standard to achieve as the testing is done in two stages, with the system exposed to burning brands, wind and supplementary radiant heat.
It was subsequently agreed that all future UK external fire exposure ratings for flat roof systems would conform with the new set of European fire standards, with the highest rated systems needing to achieve a Broof (t4) rating, using test CEN/TS1187:2012 in accordance with EN 13501-5:2016.
So, how do manufacturers achieve a Broof (t4) fire rating? Flat roofing system external fire tests are performed by accredited institutions such as the BRE or Warringtonfire. These organisations have specialist testing facilities which expose the full roof system assembly to flame and radiant heat in accordance with the CEN/TS1187:2012 testing methodology. 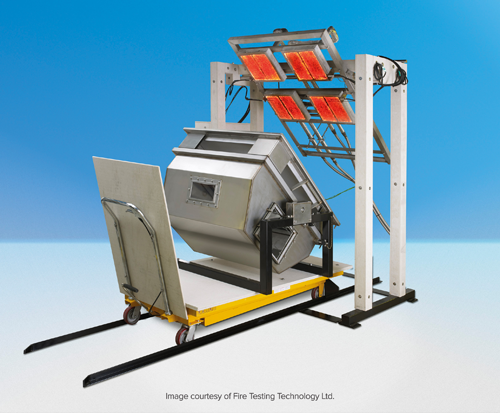 For a warm roof system, the typical build-up comprises an exposed membrane (the cap sheet/top layer), an optional underlay, thermal insulation, vapour control layer and structural deck. During testing, the exposed membranes must withstand flames and high radiant temperatures being applied to their surface for periods of time using parameters set out in CEN/TS1187:2012.
An independent fire rating is then attributed to the system, depending on its performance, with Broof (t4) being the highest rating possible. Among other factors, this rating will dictate the minimum distance the system can be installed in relation to the roof boundary and adjacent building.
Although some of the system components may be combustible, they are fully protected by the exposed cap sheet membrane. It is essentially this top-layer membrane which provides the Broof (t4) rating and enables the system to comply with the UK’s fire regulations and national building regulations.
Inverted roof assemblies include waterproofing membranes which are subsequently protected by insulation and a water flow reducing layer, and this is then usually covered by non-combustible ballast materials like concrete paving slabs and stone pebbles.
As such, most manufacturers of inverted roof waterproofing systems do not have their assemblies fire tested. The main reason is there is a European Communities Commission Decision 2000/553/EC (September 2000) which states that any flat roofing assembly with certain non-combustible coverings (concrete paving, stone pebbles, concrete) “can be considered to fulfil all of the requirements for the performance characteristic ‘external fire performance’ without the need for testing”.
The previous external fire rating standards mentioned, notably BS EN 13501-5, related to complete flat roof systems. However, this should not be confused with another European standard that exists – BS EN 13501-1. This provides “the reaction to fire” classification procedure for all construction products, including individual products within building elements and systems.
The BS EN 13501-1 classification comprises of three ratings:
A1 – F: Combustibility of the individual materials
s1 – s3: Smoke omission during combustion
d0 – d2: Droplets during combustion
The ultimate rating for a product would therefore be classified as – A1-s1, d0.
Flat roofing systems include several components which would be tested individually for their reaction to fire in accordance with BS EN 13501-1. The flexible waterproofing membrane on top would usually achieve an E rating whilst the insulation would achieve anything from A1 to F. In terms of the substrate, both concrete and metal structural decks are classed as non-combustible and therefore exceed the minimum accepted rating of B2-s3,d2 or better. Timber decks, although combustible, may sometimes be the subject of “Special Applications for Purpose Groups” where, if the roof is not more than 15m high, it allows materials rated Class B-s3, d2 or worse”.
Although the structural deck and insulation are important, the waterproofing material is essential. The waterproofing material for flat roofs needs to be flexible and easy to install, and typically these products will have a Euroclass E rating (BS EN 13501-1).
However, those that have achieved a Broof (t4) external fire rating as part of a designated flat roof system (BS EN 13501-5) will also fully comply with national building regulations due to the warm roof cap sheet material containing fire retardant additives, or a non-combustible covering being installed.
It should be noted that although some of the components of a flat roof assembly may be certified combustible in relation to BS EN 13501-1, collectively in a full roof system assembly with a fire rated cap sheet (warm roofs) or fire rated covering (inverted roofs) they may achieve a Broof (t4) in relation to BS EN 13501-5 and fully comply with current national building regulations.
Key tips for specifiers assessing the fire credentials of a particular system are:
Ensure there is evidence of third-party accreditation from a recognised testing authority such as the BBA, BRE or WarringtonFire.
Look for details within the fire section of the manufacturer’s BBA certificate or ask to see the full Broof (t4) fire test report from the recognised testing authority.
Ensure the data provided covers the roof assembly specification being promoted for the specific project. All components, product names and material performance information must be consistent.
Check the specified type and thickness of insulation is covered by the appropriate fire test. Several manufacturers only have fire test data showing one thickness, such as 120mm PIR, and this data is being rejected if the insulation thickness required is different. The assessors will not accept alternative materials to those tested and will not take risks due to legal and professional restraints. 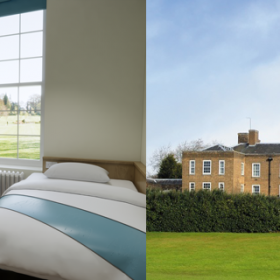 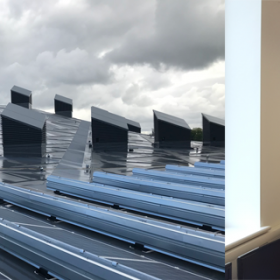 Balancing the risk…
Scroll to top