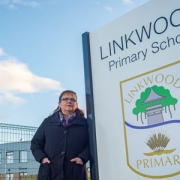 Nearly £4million has been confirmed as part of a Moray schools investment package to patch-up crumbling buildings that are ranked as being in the worst condition in Scotland.

The council cash will be spent across 14 sites during the next financial year to fix issues electrical wiring, ageing heating systems, roof repairs and drainage.

Meanwhile, a further £5million has been confirmed for new-build projects – including kick-starting preparations for construction to begin on another primary school in Elgin in 2022.

However, critics say the latest Moray schools investment package is just a “drop in the bucket” amid a repair backlog that stretches to £150million.

Concerns surrounding the state of the region’s learning estate were raised in a damning Accounts Commission report this year, which blamed a reluctance of councillors to make “difficult decisions” for the decline.

Sonya Warren, chairwoman of the council’s children and young person’s committee, said: “We know there are significant improvements needed to our learning estate to provide the best possible learning environments.

“Wide-scale and meaningful engagement is planned on how this looks in 10 to 20 years from now as part of our aspirational and investment-driven £300million strategy.

“Meanwhile, it’s hugely important we continue to invest in our school buildings so that, for our current learners, they are as close to the right standard for suitability and condition as we can achieve within the resources we have available.”

Refurbishments, new-builds, mergers and a combination of options have been highlighted as possible solutions.

Next year’s Moray schools investment package includes £340,000 being allocated to begin design work on the new Findrassie Primary School, which is planned for the north of Elgin.

Cash has been pledged to complete work on the new Lossiemouth High School, which is due to open to pupils next year.

Existing classrooms in the town are currently nearing capacity while housebuilding continues to put pressure on facilities.

Meanwhile, cash is due to spent on completing the Lossiemouth High School project, including building artificial sports pitches on the site of the existing school, and at Linkwood Primary in the south of Elgin.

Former council leader George Alexander, who represents Forres as an independent, said: “This money is just a drop in the bucket for what is needed, but these are the financial constraints the council is operating with.

“We’ve got to be careful where we spend the money though before we take decisions about the future of the estate though because I’m fairly convinced it will not remain in its present form.”

Source: The Press and Journal