Northwest school is now paying is no fuel bills this winter – thanks to a North Wales company installing an innovative, environmentally friendly heating system – saving £10,000 a year.

As winter fuel bills rise, many schools across the North West are now facing tough budget challenges to keep their pupils warm.

This is partly due to the outdated, oil-based boilers, which many schools use, that are also harmful to the environment.

Deeside Company, Niche Renewables, wants to change all this and make energy bills a thing of the past whilst reducing the carbon footprint of schools in the area.

As the government seeks to reduce emissions from public sector buildings, including schools, by 75% by 2037, Niche has just completed its first project at St Laurence Church of England school in Chorley. It’s the first of its kind in the whole country and was paid for entirely by the government*. This means the school saves £10,000 a year on heating and hot water.

Niche has achieved this by using a state-of-the-art Ground Source Heat Pump – which takes energy from schools’ playing fields and turns it into hot water and heating for the staff and children.

“The Diocese was looking for funding from the Government and looking at energy certificates and ours was quite ‘red’. Certain parts of the building were very cold, and we were using oil heating. So, we are now thrilled that we have a warm school, we are doing our part for the environment and have become greener – which was our number one priority”.

“We have now helped produce a school which is self-sustaining. It’s not asking the environment for anything. It’s just asking the playing field to produce all the energy for heating and hot water”

And Emma Marquis says she’s delighted with the result.

“There are many things that the children and governors, parents, and staff have been able to learn moving forwards, so it’s made a huge difference and the school is now very warm.”

The government decarbonisation fund,* which paid for the new heating system, is now closed for this year; but the Department for Business, Energy & Industrial Strategy released a statement:

In our landmark Heat and Buildings Strategy, we recently announced we would be investing a further £1,425m over 2022/23 to 2024/25 through Phase 3 of the Public Sector Decarbonisation Scheme, with the aim of reducing emissions from public sector buildings, including schools, by 75% by 2037.

For a video explaining more:

CLICK HERE for further details of the government’s scheme

IT RESOURCES DONATION FOR AFRICAN SCHOOL 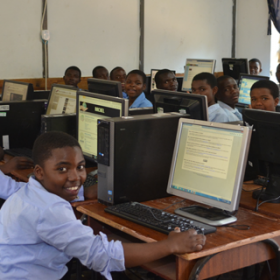