CHILDREN could move schools in a plan to deal with pressure on class sizes from the proposed construction of hundreds of new homes across Ringwood, it has been claimed.

During a presentation by a land investment company which is drawing up a 491-home proposal for land to the north of Moortown Lane, town councillors were told that pupils could be “redistributed”.

St Congar is preparing to submit an outline plan for the site, which is allocated for at least 480 homes in New Forest District Council’s Local Plan of development policies outside the national park.

The meeting heard that switches would likely affect pupils who live in Poulner and go to Ringwood primary or secondary schools.

Adam Bennett from Ken Parke Planning, which is advising St Congar, told the town council: “Ultimately there will be a redistribution of which schools pupils attend locally.”

The site’s policy includes provision for a primary school – but St Congar claimed there was “not enough space” for it and existing schools could be “upgraded” to make extra capacity.

Ralph Salmon, from St Congar, revealed it will make arguments to Hampshire County Council which, as education authority, will make an ultimate ruling on the need for a school.

Town councillors pointed out classes were already at capacity and roads congested. They noted Taylor Wimpey has also submitted plans to build 400 new homes on land north of Hightown Road.

Mr Bennett acknowledged the homes would bring pressures, but suggested children who live at the St Congar development would go to schools in Poulner.

In response, deputy mayor Cllr Philip Day pointed out those pupils would have to drive past Ringwood schools to get there, and he pledged to look closely at how the St Congar plan will affect roads.

St Congar is a land promotion business which bought the freehold of the Moortown Lane site in January. It is not a housebuilder, so will submit planning proposal to NFDC and sell the land if it gains permission.

Company representatives were unable to confirm the mix of the homes at the site, which is currently arable farming land, but said they would range from one and two-bedroom flats to five bedroom properties and 50% would be affordable, as per NFDC policy.

Included in the plan is open space and land for recreational activity, a children’s play area, dog walking facilities and pedestrian and cycle paths. To the south of the site is a parcel of land, owned by HCC, for housing and employment.

St Congar said the development would have two access roads – one entry and one exit – as well as five connection points for pedestrians and cyclists to link it to the A31 and Christchurch Road.

The development proposes building a junction at Moortown Lane and Christchurch Road as the exit point for traffic – which town councillors said was a “crucial” aspect of the plan.

St Congar’s Steve Jenkins said it believed a simple junction was sufficient – although it would bow to whatever the county council demanded. He said the plan was “evolving” and admitted the access was a “vital” element.

But Cllr Jeremy Heron noted there could be up to 2,000 daily car movements at the development, adding a roundabout was likely to be preferable.

Cllr Heron also challenged whether the development was “stealing” a parcel of recreational land. He said: “You can say all the nice buzz words that you like, but you are reducing the formal recreation space so you can build more houses when you should be cutting to it – and that is certainly not what I feel comfortable with.”

St Congar is set to start a public consultation over the plan in April and after feedback will make amendments before submitting an outline proposal to NFDC sometime in the summer. Should it get approval and sell the site, development could start in January 2023. 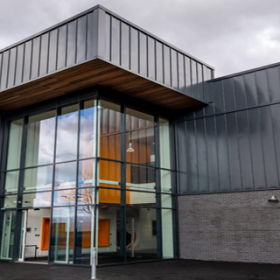