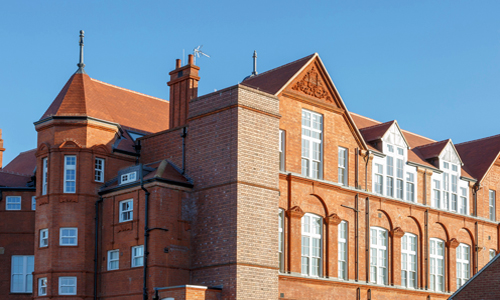 Generations of school children have attended St Joseph’s Catholic Primary School in Willesden so when a fire destroyed its roof, it was a blow to both the current students and its community.

When selecting the right roof tiles for the re-build, it was vital to find one that matched its Edwardian predecessors to return the building to its former glory. Ideal for this role, BMI Redland Rosemary Clay Classic tiles were selected by architect Wilby & Burnett. Like St Joseph’s, the Rosemary clay tile has a long and distinguished history that stretches back over 180 years.

This important project required a wealth of experience, so Wilby & Burnett worked with the main contractor Associated Installations and W O’Dwyer to complete the project for the Diocese of Westminster,

The roof at St Joseph’s is a complex one, with several turrets, numerous dormer windows and a decorative, lead-clad cupola at its centre. In addition to the complexity, a challenge for the designers and roofers was the irregularity of the old roof which had to be re-created. “It was noticed from record drawings that the building was not constructed entirely squarely and that the existing roof pitches varied in different locations. The roof had to be set out to relate to the existing gables which had to be retained,” comments architect Bob Ecclestone of Wilby & Burnett.

A number of parts of the project required additional work to bring the roof in line with current standards. Insulation was added to help meet modern energy efficiency Part L Standards and the new roof frame had to be steel rather than timber to meet modern structural design codes.

Detailing aside, one of the biggest challenges in re-tiling the roof was logistics. The whole roof was covered in a protective scaffolding, which slid open to allow materials to be craned in at certain times of the day. Most of the 76,000 tiles and many kilograms of lead came to the roof in small batches, brought in by means of a goods hoist.

The nature of this roof also required roofers with plenty of experience and traditional roofing skills. “We chose roofers we had worked with before, who were experienced and produced good-quality work,” says William O’Dwyer of contractor W O’Dwyer who delivered the £1.3m structural repair project, employing Martin UK Roofing Systems to carry out the tiling and lead work. “On a job like this, you don’t necessarily select on price, you need someone who you know will deliver a good end-product.”.

BMI Redland’s range of Rosemary plain clay tiles come in a range of eight weathered, brindled and single colours which mellow naturally over time. Rosemary Clay Classic in Red was selected as the best match for this project, providing the required aesthetics and a quality hand-crafted clay roof with the reliability of modern machine-made techniques.

With its new roof in place, few people today would know that there had been such a devastating fire at the school. “I am proud of it and everybody else is proud of it as well,” says O’Dwyer.

Having re-located to temporary buildings after the fire, the children and teachers returned to their renewed school in September 2018. This dramatic chapter in the school’s history has not held it back, however: at the end of 2018 it was listed as the second-best state primary school in the country in the Sunday Times School Guide 2019. 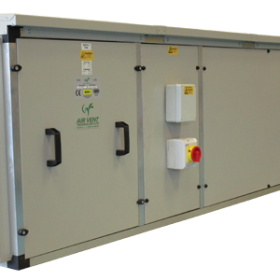 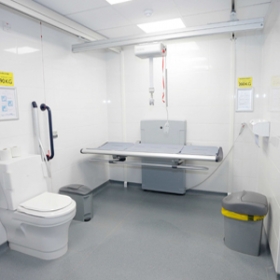