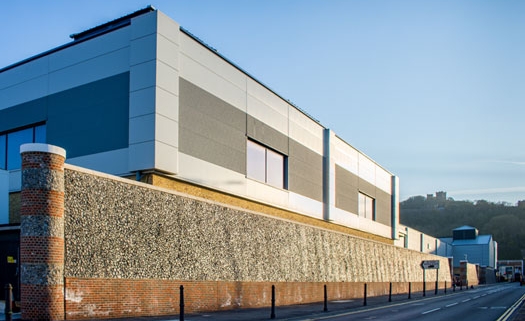 Milbank Concrete Products recently worked alongside RG Group on the design, manufacture and installation of over 90 specialist precast concrete flint embossed retaining walls at the St James Retail Leisure Park development in Dover, with an estimated contract sum of circa £24m.

The St James development has transformed the retail and leisure offer in the heart of Dover and south Kent and is located on the A20, the main road leading to the Port of Dover, making it highly visible and accessible to visitors, tourists and those travelling to and from the port.

The development comprises a range of outlets including an M&S store, a six-screen multiplex Cineworld cinema, a 108-bed Travelodge hotel and five national chain restaurants, along with a further 12 retail units ranging in size from 2730 to 16,000ft2 (254 to 1486m2). With over 450 car parking spaces and 156,915ft2 (14,578m2) of new retail and leisure space in total, the development is well equipped to cater for a large number of visitors on a daily basis.

Milbank produced 97 precast concrete walls in total, ranging from 6 to 11 tonnes, using four separate timber moulds. The complex moulds were handcrafted by skilled, in-house carpenters and specific requirements were agreed with regard to the flint layout by Dover District Council, Dover Planning Departments and the site contractors in co-ordination with Historic England, using examples of local existing flint walls.

The flexibility of having four individual moulds allowed the production team to hand-lay the flint into two moulds, while the remaining two moulds were poured. The panels were cast over a ten-week period at Milbank’s precast concrete factory in Earls Colne. During the casting process, sand was used as a bed within the timber moulds to assist with the placement and spacing of individual flint stones, which were hand laid face down in the agreed style. Dover District Council visited the factory during the production period to assess the flint arrangement and to ensure it met its needs and gave the best possible match to existing flint walls and buildings in the vicinity.

To create the desired finish, the production team hand-picked the stones to ensure they all interlocked together neatly. Once this extremely time-consuming process was complete, steel cages, lifters and pipes were located and installed and the concrete carefully poured over the top of the flint stones to form the wall structures. The following day, once the concrete curing process was complete, the excess sand was washed off and the units were turned using the in-house gantry crane to present the finished article.

Milbank’s modern Sipe batching plant is capable of producing 35m3 of concrete per hour. For this particular project, a standard C40/50 strength-class concrete comprising of 460kg/3 of Portland cement, 1800kg/m3 of mixed aggregates and 40kg/m3 calcium carbonate fines were selected to create the desired finish and achieve the level of structural integrity required.

Due to the size and weight of the wall units, with some weighing up to 11 tonnes and sitting at over 5m tall, a complex installation procedure was required involving the use of both 100-tonne and 80-tonne mobile cranes (lifting up to a radius of 17m) in combination with the specialist precast installation team. Due to the access restrictions on-site, short trailers were arranged for delivery ahead of schedule following on from an initial site consultation and the delivery vehicles arrived on a ‘just-in-time’ basis, allowing for the walls to be offloaded directly into position.

Each individual wall was located over projecting steel dowels and cast into the foundations on-site by the main contractor RG Group, a specialist in the retail, student accommodation and commercial sectors of the construction industry. Lined and levelled on shims and bedding, the walls dowel connections were fully grouted using specialist pipes cast into the rear of the structures during the manufacturing phase. The walls were designed with male-to-female connections to act as a shear key, which allowed the walls to act in unison and to reduce individual movement once installation was complete.

Due to the walls being manufactured and installed as individual units, it was required that the joining sections be hand-filled on-site by the main contractor with matching flint stones to consolidate all units into one flowing piece. Finally, end columns and caps were also manufactured on-site by the main contractor to provide finishing touches to the wall structure. The flint walls now act as a screen to the service area for the main retail block from the roadside, which includes M&S and Next at the Dover St James development. 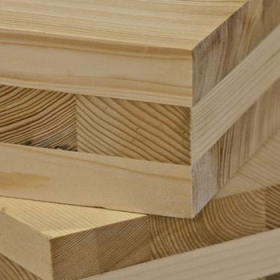