The construction of Highfield Spencer Academy in Derbyshire faced several unexpected challenges through the course of the build. The school, which has already become a community landmark, overcame these challenges and opened on time to serve a growing population. The story of how it did so is one of collaboration, creative problem-solving and a happy accident. Finding Pura® NFC by Trespa not only provided a more durable façade than timber, but it also led to using Meteon® as a signature design element.

As a result of the advancement of the housing development, Derbyshire County Council were faced with a higher-than-expected demand for school places that needed to be available in time for the start of the next academic year. This meant the time frame for the build had to be reduced to 44 weeks. However, the previously planned method of construction would not be able to meet this new timeline. The Council decided to opt for a modular building instead, knowing that their Scape Framework Contractor, Morgan Sindall, had recently delivered a nearby modular school on a tight deadline.

The council wanted the appearance of natural wood but decided to look for something more durable. In Pura® NFC, they found a durable façade solution that not only had the aesthetic appeal of natural wood but also hassle-free maintenance. That was an important bonus for a school in a fast-growing neighbourhood.

The collaboration with Trespa brought an additional benefit: the vivid palette of Meteon® cladding. The school was designed to have the elegance of Pura® NFC Slate Ebony (PU22) siding broken up by bright panels around the windows and doors. The Council was enthusiastic about the appeal of the design, as well as the maintenance cost savings from the durable Pura® NFC and Meteon®. Both are engineered to lock colour in and dirt out, without costly touch-ups.

Paul Cockayne, Principal Architect at Concertus Design & Property Consultants, enthused: “The colours of Meteon® are worth noting. The wide selection of colours available allowed that design. The project architects couldn’t have proposed the 3-D effect around the windows and doors without such a large colour range being available. The product really helped with that.”
The modules were delivered to the site, much to the bemusement of the locals who couldn’t picture how these unclad boxes would form a building. Then, when the project was 17 weeks into its 44-week plan, the pandemic hit. Supply chains across the UK were disrupted and plants were shutting down as developers furloughed employees. For the Highfield Spencer Academy project, delaying construction was not an option.

Subcontractors informed Morgan Sindall that they would not be able to deliver under the pandemic circumstances they were facing. Trespa, however, delivered the Pura® NFC and Meteon® sidings on time, allowing the façade construction to proceed apace. Despite the disruption of the pandemic works recommenced, and the building was finished one week ahead of its already compressed timeline.

Locals warmed to the building as they saw its striking appearance. Students and locals alike call it “the rainbow building”. Just across from the new commercial centre, the brightly coloured building has become the heart of the blossoming community – right on schedule!
For more information and technical support, call 0808 234 0268, email info.uk@trespa.com or visit the website.

The real impact of bathroom design in schools 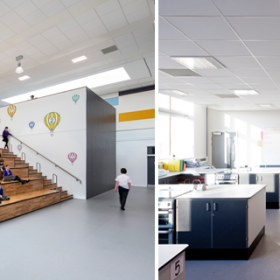