Sarah Wigglesworth Architects (SWA) has been ordered to pay a local council £1.3 million in damages over ‘long standing’ issues with an eco-school in West Yorkshire

The London-based practice’s RIBA award-winning Sandal Magna Primary Academy in Wakefield has been celebrated as one of the most carbon-efficient schools in the UK and was built in cross-laminated timber (CLT).

But despite only being open since 2010, the building in Belle Vue Road has been plagued with problems, with leaks in its roof leading to multiple repair jobs, timber decay, and children being moved into temporary classrooms.

The issues with Sandal Magna became more severe in 2020 after the council decided to replace the defective roof on the £5.2 million building. Midway through the project, the builder moved to the main teaching block where it discovered ‘extensive’ timber rot and ‘significant structural concerns’.

Following an independent investigation, the decade-long saga has come to a head with an adjudicator deciding last week SWA should pay the council £1.3 million in damages.

Last week Wakefield Council said the adjudicator had decided the architect was ‘largely responsible’ for the issues, although there were also problems with the original construction company’s design responsibilities and workmanship on the roof.

But in a statement, SWA said it did not agree with the adjudicator and had sought to challenge the decision.

‘For purely commercial reasons, SWA entered into a settlement agreement with the council, the terms of which are confidential and cannot be disclosed save to say that the parties agreed that the settlement should not be represented or construed by [the council] as an admission of liability or wrongdoing on SWA’s part,’ the practice said.

It added: ‘The recent adjudication award is a disappointment to SWA, which strove for quality as with all its projects. Adjudication is, by its very nature, rough and ready justice.’

The 2020 issues prompted council leader Denise Jeffery to launch an investigation by Anthony Collins Solicitors, which released findings in July 2021. It found that leaks were a ‘consistent issue’ that led to the school being closed and damage being caused on multiple occasions.

It also found that a number of surveys and reports had been made on the roof, with the majority showing the problems were due to ‘poor build quality and bad workmanship’.

According to the report, the contractor Allenbuild had struggled with the architect’s ‘quirky’ and ‘unorthodox’ approach, and there were errors in the design.

‘It appears that, on paper, the design was workable. However, issues arose when SWA turned the design into a 3D building to be built in practice,’ the report said.

It revealed too that there had been disagreement between the contractor and the architect from the outset, with the report highlighting an email dispute over cladding choices from 2009.

There were also issues between SWA and NPS. At procurement stage, the report said SWA had requested that it be hired directly rather than being procured through NPS.

It said: ‘It appears that SWA wanted more control of the project to realise their vision in their design brief, which suggested environmental and structural engineers for the building aspect of the works. There also appears to have been tension between SWA and NPS at an early stage.’

The report was also critical of the council, saying it should have acted quicker to replace the roof and that although surveys were carried out, the earlier studies did not look at the foundations to identify that the wooden structures of the walls were becoming damp and rotten.

SWA was appointed to the project, its first school, in 2005 with its design based on an ‘exemplar’ scheme the practice created for the DfE’s Building Schools for the Future programme.

The new building for Sandal Magna was designed to accommodate 210 pupils aged between 5-11 years alongside nursery provision for 26 children.

The 2003 design brief identified that sustainability should be considered at all stages of the building process, and the completed school included a ground source heat pump, natural ventilation and rainwater harvesting. It won a RIBA award in 2011.

The project faced funding issues early on, and a value engineering exercise was undertaken in early 2007 to reduce the costs of the works.

SWA added: ‘SWA is extremely saddened by the disruption caused over the past years to the workings of the school, which, during the design process, was a supportive and inspiring client.’

Vicky Schofield, Wakefield Council’s acting corporate director for children and young people said: ‘We welcome the adjudicator’s decision, which confirms responsibility for these longstanding issues. Thankfully the matter is now resolved, and the completed building has been formally handed over to the academy trust.’

OUT OF PORTACABINS AND INTO CLASSROOMS 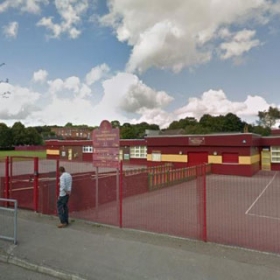