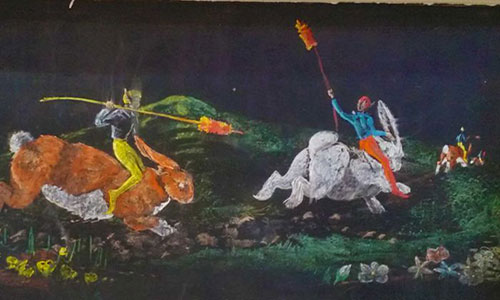 A retired school teacher has revealed herself as the creator of a series of whimsical blackboard artworks uncovered by builders during renovations to a school in Melbourne’s inner-north this week.

Builders at Northcote Primary School were refurbishing the school’s hall earlier this week when they removed large corkboards that had been installed in front of about half a dozen 3-metre blackboards.

Assistant principal Ross Bennie said the workers immediately recognised the potential significance of the art and called him down to the school.

“I was very surprised at the level of detail … the detail was quite old, they’d taken some fairly old drawings or the artist had interpreted them from fairly old nursery rhymes,” he said.

Mr Bennie said some of the artworks had a more “sinister” air to them, including red-eyed rabbits in an Alice and Wonderland-inspired theme and goblins with pointy ears.

“There’s one scene where there’s a number of children sitting around a campfire with pots and things like that and cauldrons,” he said.

“It’s the sort of thing you possibly wouldn’t see reproduced in schools these days.”

Mr Bennie said the school hall, which was built around 1910, had undergone significant renovations over the years and speculated the artworks may have been created by a former teacher in the 1950s.

It turned out he was right.

Retired Northcote teacher Elaine Hobbs came forward shortly after images of the blackboards were published to reveal herself as the artist behind the works.

The series of chalk tableaus were created in 1959. Ms Hobbs said the resurgence of the artworks made her feel “reborn.”

She said she was asked to create the art in 1959 after the headmistress was impressed by the art she had drawn in her classrooms. “I was always illustrating, either on my own blackboard or on other people’s blackboards,” she said.

Ms Hobbs said it took her about two weeks — and many sticks of chalk — to create the artwork in a bid to spruce up the school hall.

“We didn’t have the kind of abbreviated, cutesy style that you see in children’s stories now, they were more detailed,” she said.

The wave of community interest and excitement around her 60-year-old drawings came as a pleasant surprise to her.

“This is like being reborn, taken back to the way things were at that time, yes, it’s woken up a few memories,” she said.

Mr Bennie said the school was keen to preserve the drawings and find a way to celebrate and display them in the future. 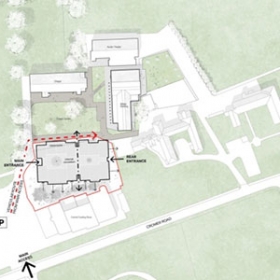 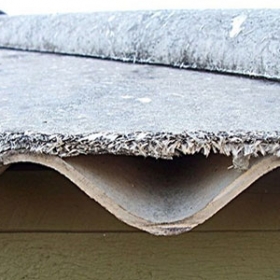 The “Silent Killer” lurking in School Buildings
Scroll to top