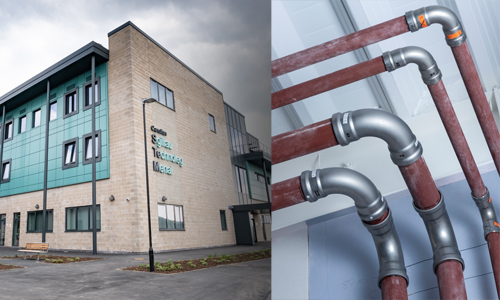 Viega has supplied its German engineered press connection technology to the development of a new state-of-the-art engineering centre at Coleg Menai’s Llangefni campus. The construction of the new facility, which will help train the next generation of engineers has utilised Viega’s Profipress copper piping connections as well as the industry first Megapress solution for thick-walled steel tube across the hot and cold water and heating systems.

The £13.6m centre for engineering excellence, named Canolfan STeM, was officially opened by the First Minister of Wales in spring 2019. The centre will provide training to over 1500 learners of all ages, from school enrollments to higher and further education courses, to work based learning and commercial clients.

David Sanders, Mechanical Operations Manager at AJ Field explained: “We had used press connection systems previously and while the speed and simplicity of the install was a big advantage we had experienced some issues with reliability. On a project such as this we had to ensure that the fittings would perform as intended to prevent costly remedial work after the building was completed. Quality at each stage was a key focus for RL Davies Construction, the main contractor on the project. SBS was able to show us the particular benefits of the Viega system and we were convinced by what we saw. The SC-Contur feature was a major factor in our selection of the system.”

Viega’s patented SC-Contur technology, included in press connections across its range, is designed to deliver a 100% positive leak if the fitting is inadvertently unpressed – clearly discernible during leakage testing or when the system is filled for the first time. This ensures a reliable method of detecting these issues early in the process.

In addition to the copper pipework, thick-walled steel tube was specified to provide enhanced durability for the new building’s heating system. Viega’s Megapress system allows press connections to be used on thick-walled steel and provides between a 60% and 80% time saving compared with alternatives such as welding, grooving or threading tube.

Graham Foster, Area Sales Manager at SBS Merseyside explained: “The AJ Field team had originally intended to use screw and socket fittings however when we looked at the plans and requirements we recognised that the Megapress system would be ideal.”

A range of Megapress fittings were used during the installation of the low pressure hot water (LPHW) heating system, including the latest addition, Megapress S. The unique innovation allows larger sized tube with diameters between 2½ and 4 inches to be press connected.

Furthermore, the construction of Canolfan STeM is intended to serve as an illustration of modern construction techniques and engineering technology. As such, sections of the pipework will be left exposed to provide an installed example of the systems that students will be trained to use.

David Sanders added: “From the start of the project we looked for systems and solutions that represent the cutting edge of modern construction. We have been thoroughly impressed with not only the Viega systems but also the product training and support we have received throughout the project from the merchant.”

Scott James, Director at Viega concluded: “We are delighted to have been able to contribute to the success of a development that will have such an important impact not only for Coleg Menai and the local area but also the future of industry.”

To find out more about Viega’s range of solutions visit: www.viega.co.uk. 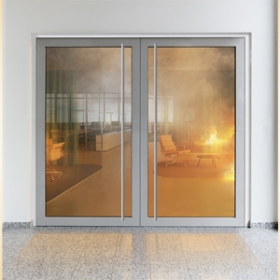 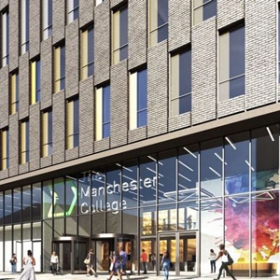